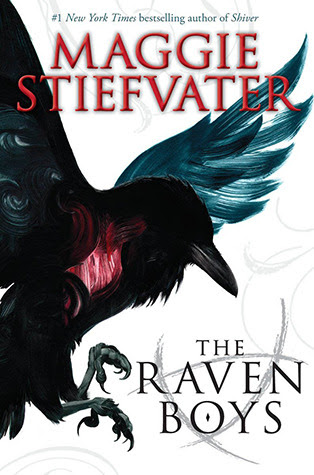 First Sentence It was freezing in the churchyard, even before the dead arrived.

Synopsis
Gansey, Adam, Roland, and Noah are friends, friends with a purpose. To find the Ley lines. Blue lives in a family of Psychics. Their paths were bound to cross, and when they do things are about to happen.

What it has going for it
I had such mixed feelings going into this one. See, I really wasn't fond of Shiver, the only book in that series I read, but I adored The Scorpio Races. So I wasn't sure what I'd think of this one. Everyone was raving about it so I decided to bite the bullet and read it. What did I think? I liked it, not loved it, liked it. Maggie had the remarkable ability to write a gorgeous, meandering story that gently unwinds revealing surprise and beauty with every turn of the page. Her characters are vivid and memorable which is impressive considering there's so many in this one. I enjoyed the fun idea behind this one and am invested in seeing where it all goes.

What's lacking
Yeah, I know it's a series of books and this is the only the first, but I was hoping for a little less build up and a little more substance. It took nearly half the book to really get going and then nothing really happened or was wrapped up. Everything was left open. In other words, it was like a 400 plus page prologue to the series. A beautiful prologue but still.

Favorite moment
When Blue was studying in her backyard and Adam came over. There's all these words they could have said but instead she just waves him over and he lays his head in her lap. It was just so sweet to me.

Yea or Nay?
Yes, I'd recommend it but just be prepared for more of a set up to the series than a complete story.
Posted by Jenny at 7:00 AM