Review: The History of Love

First Sentence When they write my obituary. Tomorrow. Or the next day. It will say. Leo Gursky Is Survived By An Apartment Full Of Shit.

Synopsis
An old man who makes a spectacle of himself to be seen and remembered; a girl whose decided to get her book translating mother remarried; and a man who'll bring his secret to the grave. Their stories  come together in this remarkably beautiful and entertaining book.


What it has going for it
I love YA books but reading adult books are so refreshing. They don't all end happy and hopeful and some, like this one, remind you how beautiful writing can be. This book astounded me with it's ability to keep me so entertained and enthralled when nothing was really going on. Not to say nothing was happening, because it was and when it all comes together...Beautiful. There were tears, people. It was funny (look at the first sentence from the book again) and sad and just plain delightful! It makes me want to read more adult books. And it makes me want to read more by this author.

What's lacking
It's all going along fine and all of the sudden you realize you're horribly confused. For a minute I almost felt like giving up. But only for a minute. I knew it would all come together and makes sense in the end. And it did.

Favorite moment
The ending for sure. It was so beautiful and heart wrenching. I cried like a baby.

Guys, my reading and blogging isn't the only thing that's taken a hit because of the job. No, much as it saddens me to say it, my boys have been suffering too.

I'm there good luck charm. I really am! I suspected as much, if you may remember, but now I know it's true. See, I've missed so many of their games because of work and this is what's happened.

Guys!!!! Third?! There in third place?! They won the whole thing last year! And if you think I'm lying about my good luck, look what happened when I actually got to watch the game on Sunday.

They should seriously just pay me to watch! ;) They're playing again today. I can't watch. :( Good luck boys!

Now, in case all those stats bored you here's something to enjoy.

Review: The Unbecoming of Mara Dyer

First sentence The ornate script on the board twisted in the candlelight, making the letters and numbers dance in my head.

Synopsis
Mara Dyer doesn’t think life can get any stranger than waking up in a hospital with no memory of how she got there.It can.
She believes there must be more to the accident she can’t remember that killed her friends and left her mysteriously unharmed.
There is.
She doesn’t believe that after everything she’s been through, she can fall in love. She’s wrong.  (from Goodreads)

What it has going for it
I'm a little scared to write this review, guys. This book was on nearly everyone's top ten favorite books of 2012 and seeing that encouraged me to finally pull it off my shelf and start reading. Unfortunately, and as usual, I didn't find it all that amazing. But don't worry, I didn't hate the book. There were good things about it. First of all, despite how predictable it was, I really enjoyed watching the story unfold and thoroughly enjoyed watching Mara discover her secret. Sheesh, besides that I can't think of anything else  that wowed me.

What's lacking
Well, as I mentioned, it was incredibly predictable. Yeah, there were a few things that while I suspected something I wasn't positive what they were, but I like being blindsided and I never was. My biggest complaint, though, was the romance. I know, I know, it's a supernatural/paranormal romance, but it completely took over the whole story! It's like we got thrown into this mystery, it grabbed us, gets us interested and then, after we're tied down, we get hundreds of pages of "romance". And I call it "romance" because...I didn't like Noah. I know, you're not surprised, neither am I, but still.  And it also irritated me that Mara really never seemed upset that her friends were dead. They just up and move and she's already joking around with her brother and Noah. It just didn't feel believable. You don't get over losing your best friend and having no memory AND hallucinating that quickly. Oh, and the "twist" ending...I'll admit I didn't suspect it but rather than gasping or being shocked I specifically remember rolling my eyes.

Favorite moment
Meh, nothing blew me away. I liked the scene in the swamp and the whole alligator thing. That was creepy.

Yea or Nay?
Sure, but you're not going to find anything new or surprising here.

First Sentence It was freezing in the churchyard, even before the dead arrived.

Synopsis
Gansey, Adam, Roland, and Noah are friends, friends with a purpose. To find the Ley lines. Blue lives in a family of Psychics. Their paths were bound to cross, and when they do things are about to happen.

What it has going for it
I had such mixed feelings going into this one. See, I really wasn't fond of Shiver, the only book in that series I read, but I adored The Scorpio Races. So I wasn't sure what I'd think of this one. Everyone was raving about it so I decided to bite the bullet and read it. What did I think? I liked it, not loved it, liked it. Maggie had the remarkable ability to write a gorgeous, meandering story that gently unwinds revealing surprise and beauty with every turn of the page. Her characters are vivid and memorable which is impressive considering there's so many in this one. I enjoyed the fun idea behind this one and am invested in seeing where it all goes.

What's lacking
Yeah, I know it's a series of books and this is the only the first, but I was hoping for a little less build up and a little more substance. It took nearly half the book to really get going and then nothing really happened or was wrapped up. Everything was left open. In other words, it was like a 400 plus page prologue to the series. A beautiful prologue but still.

Favorite moment
When Blue was studying in her backyard and Adam came over. There's all these words they could have said but instead she just waves him over and he lays his head in her lap. It was just so sweet to me.

Yea or Nay?
Yes, I'd recommend it but just be prepared for more of a set up to the series than a complete story.
Posted by Jenny at 7:00 AM 44 comments

In Case You Didn't Recognize Me

Maybe some of you noticed and maybe some of you are thinking, "who the heck is this weird Jenny girl commenting on my posts?" Well, it's still me. I finally changed my profile picture on my blog, Goodreads and Twitter. 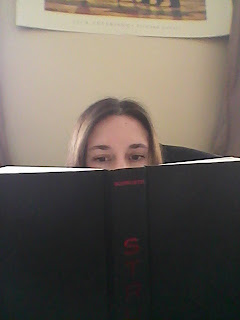 Yeah, I'm lazy and used the same picture I took for Photo-a-Day of a self portrait. Whatever, it's bookish so it's staying....for now. ;)
Posted by Jenny at 7:00 AM 25 comments Considering the lull I've been in and the holidays, I'm impressed I managed a whole four books in December.  Anywho, here they are.

Shut Out by Kody Kelpinger
Oh, how I love the steamy kissy scenes.

Pushing the Limits by Katie McGarry
A little too long for a YA contemporary and what's with him calling her babe? Ugh!

Unwind by Neal Shusterman
I really was expecting a more fast paced story but all in all, I liked it.

The Scarlet Letter by Nathaniel Hawthorne
Why, when I wasn't forced to read in high school, did I feel the need to torture myself now? Sigh!


Favorite of the month was Shut Out least favorite was The Scarlet Letter. Here's hoping for more books read in January.

Today, The Broke and the Bookish asks: What are the Top Ten books you are GOING to read in 2013?

I emphasis "going" because I AM GOING to read these books this year, dang it!

This was actually hard to choose! Thank goodness I can read more than 10 books a year! ;) Happy Reading! May you get to those books you really want in 2013!