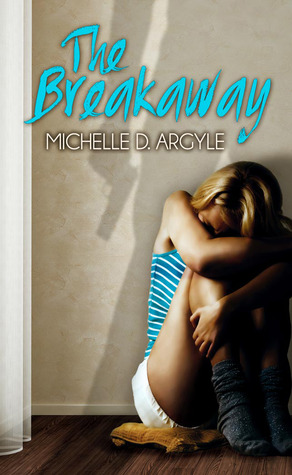 Title: The Breakaway (the breakaway 1)
By: Michelle D. Argyle
Genre: YA contemporary
Pages: 303

First sentence: The kidnapper looking down at Naomi held a book of poetry to his chest.

Synopsis
An only child raised by nannies with parents that are absent at best and a boyfriend that's possessive and abusive, Naomi is not your normal teenager. When she stumbles upon the wrong place at the wrong time and ends up kidnapped her only way out might be to pretend to be falling for one of her captors. But what if her false feelings aren't so false and suddenly life seems better with her captors than it did at home?

What it had going for it
I'm all for a great kidnapping story. Throw in a touch of Stockholm's syndrome and a swoon worthy kidnapper with green eyes and you've got me hooked. I enjoyed this one enough to spend an entire morning in bed ignoring my duties, life showering etc to finish it. The way it starts with Naomi already in captivity and then slowly reveals her sad past with flashbacks was a great way to tell the story. I liked the glimpse we got into Karen's, Naomi's mom, life after her daughter was kidnapped. Although subtle and not quite enough for me I did like the growth we saw in all the characters. I like when a book ends with the characters having grown and changed. Hopefully for the better.

What's lacking
As much as I wanted to love this one and be caught up in the drama and suspense I was to be disappointed. There was one, count it, one time it was suspenseful. While I understood why Naomi was the way she was it drive me absolutely crazy how docile and compliment she was. She tries to escape once. Grrr! And it was a half assed attempt to. I also thought her change at the end wasn't that much of a change. I would hope her year in captivity and her soul searching would have been a little more life altering. Oh well.

Favorite moment
On Naomi's birthday when Jesse kissed her. Steamy!

Yea or nay?
Yeah I guess but be prepared to be annoyed with Naomi.