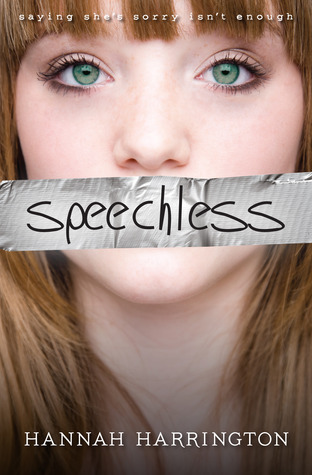 Synopsis
Known as the high school gossip, Chelsea Knot has a big secret. In a drunken stupor she blurts out that secret about a boy that results in him getting beat up and ending up in the hospital. Even though she turns in the perpetrators she still can't rid herself of the guilt. So she takes a vow of silence. She won't be spreading any more rumors. She won't speak at all. Saying sorry isn't enough.


What it has going for it
Well, I loved the idea of this one. I saw so much room for a snotty gossipy girl to learn and grow...but alas.

What's lacking
My biggest issue with this one, aside from the fact that the main character really doesn't learn from her experience, was that nothing followed through. For example. Chelsea, our chatty Cathy, gets her idea to take a vow of silence from an article about a monk. He took a vow of silence and learned to meditate and self evaluate. So, of course at the beginning I'm thinking: "aw sweet, she's going to realize that not only should she keep her mouth shut but that maybe her arrogant judgey attitude was crap!" Alas, our character never learns a thing. She had the decency to report the perpetrators, at least, and had to endure a minor amount of bullying but other than that there was no change of character. Sure, she got a new group of friends that welcomed her with open arms, which she didn't deserve, and yes, she isn't quite so high and mighty in the end but the changes in her attitude were concocted by the author. Never does Chelsea look at herself and realize what a horrible person she was. Alright, I'm going to stop. The book really wasn't that terrible. I just really wanted the character to self evaluate and grow but she just lucked out and moved on.


Yea or Nay?
You won't be missing anything by skipping this book.