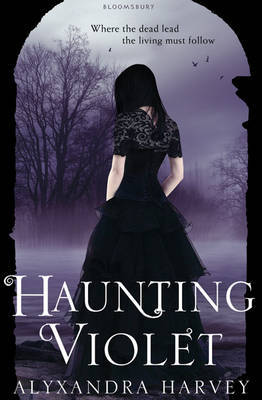 Synopsis
Violet's mother has been masquerading as a medium Violet's whole life. They've worked their way up to being invited to a country estate for a spiritualist party. But when Violet starts actually seeing ghosts she wants nothing to do with them. The ghosts won't leave her alone, though and Violet finds herself dragged into the mystery of a murdered young girl.

First Sentence
A lady does not dance more than two dances with the same gentleman.

Oi! This one has been on my shelf for a long time. I finally decided to pick it up and proceeded to be incredibly disappointed.

I'm not sure if it was a mood thing or what but I had zero patience for the amateurish feel of the writing in this one. I actually thought it was a debut novel, it felt so unpolished, but, nope, the author has written lots of other books. Several of which were published before this one. Could have fooled me.

I also think I was expecting a more modern day setting but this takes place back in Victorian times. Maybe Edwardian times. I'm not sure. That little detail escaped my notice, like most of the details in this one. Yay! Maybe I won't remember how bad it was for long.

Filled with all the YA cliche's of its day I found this one trite and boring and had to give up half way through and skim to the end. Even the skimming was bad. I should have just set this one down 20 pages in when I could tell we weren't going to get along. Oh well.

Should you read it
I think my dislike of this one is personal. So go ahead and give it a shot if you think it's your cup of tea. Just don't expect me to show up to that tea party.
Posted by Jenny at 2:00 PM