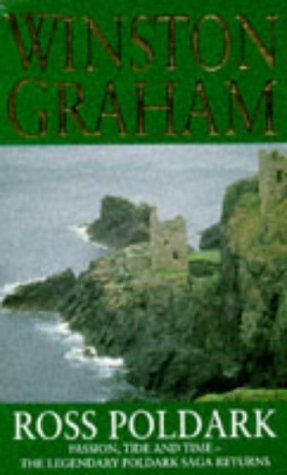 Synopsis
Ross Poldark arrives home to Cornwall from the war to find his father has passed away and the girl he loved married to his cousin. Trying to get his father's house and copper mine back in order he tries to deal with his grief.

First Sentence
It was windy.

Another book club read. I've seen  season one of the TV series and had so much fun ogling Aiden Turner that I was eager to read and compare the book. Sadly, I found the book so similar to the series that I couldn't find a reason to read it. In fact, I struggled so much that I finally just downloaded the audio and listened to it while working.

Listening helped make it go faster. I found it so similar that I could zone out at points and quickly orient myself when I started paying attention again. I know, I know! That's awful of me. I didn't hate the book I just found it a bit boring when compared to the show.

There were some differences, of course, but nothing so monumental that I could justify reading the book. I guess what I'm saying is, just watch the show and ogle Aiden Turner and skip the book.