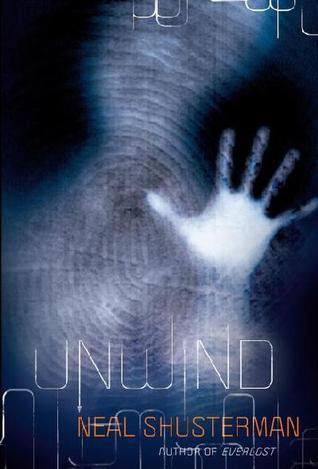 First Sentence "There are places you can go, " Ariana tells him, "and a guy as smart as you has a decent chance of surviving to eighteen."

Synopsis
In the future, parents have the choice to have there children between the ages of 13 to 18 "Unwound". Conner, Risa, and Lev are on the run after their parents choose to have them Unwound.

What it has going for it
I have absolutely nothing against Neal Shusterman, the man's a genius and a damn fine story teller. I'll admit I've only read a few books by him so far but I've enjoyed each one. This one's strongest attribute is how much it makes you think. I read it for book club and, boy, did we have a fun discussion. You can't read a book like this one and not discuss. Told from mostly three point of views, I was surprised that in the end I most enjoyed Lev and was curious as to where his story would go. Conner and Risa were fine but I couldn't connect to either and I felt a little bit like I was being told what to feel for them. Not so with Lev. And, yeah, that's about all I can say in support of this one.

What's lacking
Sadly I was rather disappointed in this one. First off, it was completely unbelievable. I have a hard time buying that pro-life people would actually agree to the whole Unwind thing. I seriously doubt it. Second, I was expecting this nonstop, gripping, un-put-downable book and what I got was a rather dull "journey" book. Everything that happened didn't exactly feel like it fit together. No, instead it felt rather episodic, if that makes sense.  I really did like Lev, though, (don't ask me why, I'm not sure) and I think I might read the rest of the series just for him.

Favorite moment
Hands down how Lev steals from the pawn shop....AWESOME!

Yea or Nay?
Once again I seem to be in the minority on this one so don't take my word for it. Go ahead and give it a go.
Posted by Jenny at 8:03 PM

Email ThisBlogThis!Share to TwitterShare to FacebookShare to Pinterest
Labels: book review, dystopian, YA