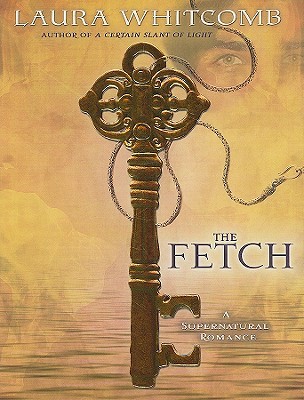 Title The Fetch
By Laura Whitcomb
Genre YA, Supernatural
Pages 380


First Sentence Calder was a Fetch, a death escort, and had been since his own death at the age of nineteen.

Synopsis
Calder is a Fetch, a death escort, the first of his kind to step from Heaven back to Earth.The first to fall in love with a mortal girl. But when he climbs backwards out of that Death Scene, into the chaos of the Russian Revolution, he tears a wound in the ghost realm, where the spirits begin a revolution of their own. (From Goodreads)


What it has going for it
Laura Whitcomb is a beautiful, lyrical writer. She has a way with words that reads like poetry...without the falling asleep from boredom thing. I loved the idea behind this book. The Fetch is such an interesting idea. I've always been fascinated with Death. I mean death as a person. Not death, death. I'm not that morbid. Anywho. I love the idea of an actual person showing up at a death and escorting someone to heaven or the afterlife or whatever you want to call it.  Then, if you're not totally worn out with romance yet, add the falling in love with a mortal girl and leaves heaven for her, and you've got one heck of a story idea. Am I right? Well,  I've been putting off reading this book forever. I loved A Certain Slant of Light by Whitcomb so I really wanted to delay my pleasure in this one. It just sounded so wonderful and I had high expectations. I guess you're hearing the "but" in my voice and you'd be right. However, before I say the negative I will say that this one was still beautifully written with a unique and exiting idea behind it.

What's lacking
As I mentioned, my expectations were through the roof, so I can't entirely blame the book. My biggest problem with it was that Whitcomb decided to involve the Romanov family. Specifically Anastasia and Alexie, the two youngest Romanov's. Yeah, that might sound exciting but it just didn't work. Almost the entire book was about traveling from Russia to Japan to California to New York to England and back to Russia. You see the problem? The whole very clever idea behind this story lost its self to a history lesson. Sort of...anywho, it just didn't work and I was left horridly disappointed.   That isn't to say there wasn't a lovely lesson about redemption and courage and not giving up but it was lost in the traveling. Sigh!

Yea or Nay?
Uh, I'd say just skip this one but maybe I just wasn't in the mood or my expectations ruined it so my recommendation is probably tainted.