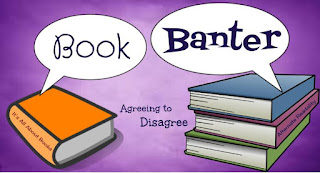 Time for another Book Banter! Are you bored yet? No? Of course you're not. You love this stuff. Alright. This weeks topic is Tom Hiddleston. Yeah, OK, he's not book related but it's still a fun topic for Suey and I. She adores him. His looks, his personality etc. I, however, just don't get it. I mean, I get his personality is great but his looks...not so much. So here we go.

Suey
Smile: While I agree that he might not have the typical look of a heart throb, (though it can be argued that his untypical look is quite heart throbby enough) you can’t deny that he has one of the best smiles in existence. And I, for one, think that smile supersedes anything he might lack otherwise. (Though I could still argue that his eyes, his dance moves, and his general classic tailored polished look has a lot going for him too!) But his smile! It’s so contagious. It’s so brilliant and beautiful and bright. Seeing that for the first time in the theater watching Thor, I pretty much totally forgot Thor (who DOES have every single “normal” heart throb attribute going on in his favor) because of that Loki/Tom smile.

Me
Why, yes...I suppose he does have a nice smile...once he opens those thin pursed lips of his to reveal it. (check out more of my thoughts on Suey's blog)


Suey
Charm: Of course we none of us know what Tom Hiddleston is like in real life. All the celebrities put on a face for us no matter who they are or what they’re doing. But I feel that Tom must, he MUST truly have the charm that he exudes for us all. That charm, I think even more than the smile, is what has made so many of us fall for him. He is charming as himself, he’s charming as Loki, he’s charming as whoever he is in that haunted house movie (even though I haven’t seen it I’m pretty sure he’s charming, in creepy way, am I right?). It doesn’t matter the role he’s playing, or the face he’s presenting, he can’t help but be charming. The style he sports, the gentlemanly manners he practices, the ideas he professes to…. all charming and perfect.

Me
Uh, can't really argue against his charm, though, no, he's not charming in Crimson Peak. He was creepily disgusting. Yuck! Plus, I think he's type cast into a well mannered gentleman and us girls fall all over ourselves for it but lets not forget he's just acting that way. He's not actually royalty from another plant or a gentleman from the distant past. He's probably not as charming as we think. He can probably burp the alphabet with the best of them.


Suey
Acting/Singing: So I’ve only seen him in a couple of movies and I really haven’t seen him sing yet except random YouTube clips. But what I HAVE seen makes me tend to declare that he is one amazing actor. And I can’t wait to see him in more stuff, especially the upcoming singing one! I find it interesting when someone like him plays a role for someone like Loki and we all fall in love with Loki, the villain, and a pretty awful sad sorry mean old villain too, then that says something for the way that villain is acted. Know what I mean? He’s amazing. AMAZING! I don’t know how else to say it. Just. . .amazing.

Me
Tom sings? Hmmm, who knew? Not me. I'll have to check it out. I actually have only seen him in a few movies but personally, I'm not blown away by his acting. I think he acts the same in all his movies. Not to say he's not a good actor just not versatile. But that's just me.

So, there you have it. If you want to know what I really can't stand about Tom, you'll have to check out my thoughts on Suey's blog. There's pictures!
Also, it's Suey's birthday today! Wish her a happy birthday while you're there!
Posted by Jenny at 7:00 AM