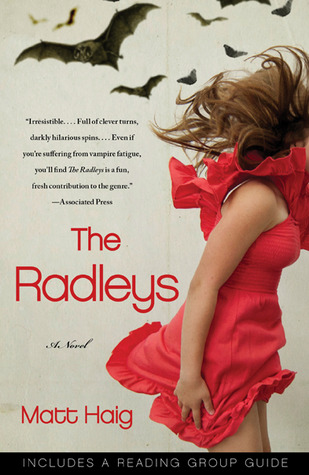 Synopsis
The Radleys appear like your typical suburban family. Peter is the doctor at the local clinic. His wife, Helen attends a neighborhood book club. Their son Rowan is quiet, into poetry and pining after the new girl at school and their daughter Clara has recently become a vegan. They even have the embarrassing black sheep of the family uncle they wish would stay away. But things aren't always as they seem. The Radleys have a secret. They are vampires. Not even their children know. They've been abstaining from blood for 17 years...that is until Clara is attacked by a boy and she accidentally drinks all his blood and kills him. Now with the police questioning them, and their uncle in town causing mischief, the Radleys secret might not be so secret anymore.

First Sentence
It is a quiet place, especially at night.

Should you read it?
To be honest, I think most of my blogging buddies might not like this one. It had too slow of a start and the dual narratives and content might bother a lot of people. However, if you like tongue in cheek humor and thrilling endings you might want to give it a read.
Posted by Jenny at 7:00 AM