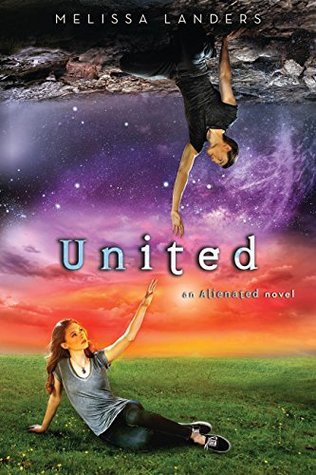 Synopsis
Just when Cara and Aelyx thought they could finally enjoy their new life together on L'eihr a message from a new planet threatens to destroy not only the bond between earth and L'eihr but between Cara and Aelyx.

Again, free and available on Overdrive and something to listen to whilst I do all the things I have to do that don't allow for sitting on a couch and staring at a book. And I admit I wanted to know what was going to happen.

While this one felt too long and had a lot of uneven pacing lowering my rating back to two stars, I still found it a satisfying, albeit convenient, ending to the series and I don't regret reading it or the series.

One of my favorite things about this series is the guy. Usually I hate these teen guys who do that whole youhavetostayhereandoutofdangercontrolfreakthing. I LOATH that about guys. I know it's supposed to be out of love but it's suffocating and insulting and I hate it!

Aelyx however never even came close to uttering those words. Cara was right there beside him fighting and I loved it. Alright, teenagers, especially a 17-18 year old red head with as much responsibility as a 50 something adult, responsible for saving the world was unbelievable and more than far fetched but it works. It was fun watching them save the world. Again.

Should you read it
Well, if you've made it though the first two books then alright, read it. ;) Did I mention they're free and always available to listen to on Overdrive?
Posted by Jenny at 7:00 AM

Email ThisBlogThis!Share to TwitterShare to FacebookShare to Pinterest
Labels: book review, scifi, YA