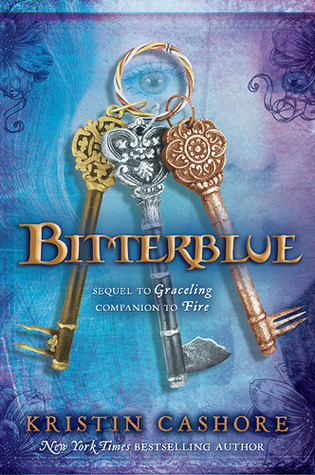 Synopsis
Bitterblue has an overwhelming responsibility on her hands as the queen of a people ruled by a madman for 35 years. As she struggles to become the kind of queen her mother wanted of her she'll have to rely on her friends and her own intuitiveness to succeed.

First Sentence
Queen Bitterblue never meant to tell so many people so many lies.

I read Graceling, the first book in this series, ages ago when it first came out and Fire, the second book, not long after it's release. It took me six years to read this one after it's release. I even reread the first two in December to refresh my memory. I don't know why it took so long to get to this one, though, it was a perfect ending.

It was slow and a tad long but I loved ever minute of it. Watching Bitterblue maneuver the politics of her kingdom and her heart was a delight.

I enjoyed the return of old characters, especially Po and loved how it all came together and ended satisfactorily.
Posted by Jenny at 7:00 AM

Email ThisBlogThis!Share to TwitterShare to FacebookShare to Pinterest
Labels: book review, fantasy, YA