Review: Daughter of the Sun 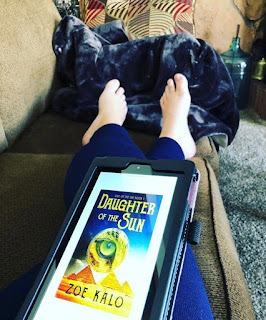 Synopsis
Trinity has only known life at the convent. She was dropped there days after her birth. When a grandmother pops out of the woodwork she's whisked away from the only life she's ever known to a world of magic, wealth, boys and cats. But something sinister is going on in her grandmother's house and as Trinity comes into her powers she'll have to put a stop to it.


*I received a copy of Daughter of the Sun from the great people at Author Assistant.*

I agreed to read this one because I'm holding out the hope that someone someday will write a fun Egyptian based story.

Daughter of the Sun, sadly, wasn't that book for me. I felt like the story took way too long to get going and was incredibly predictable from nearly the first pages. I knew every twist and turn that was coming and not once found myself surprised which was a huge let down.

The book was edited cleanly but I felt like the story was one I'd heard a million times with all the cliches you'd expect.

I feel bad because I really wanted to like this one but I only found it and OK read. Sadly, I won't be continuing on with the series.
Posted by Jenny at 7:00 AM