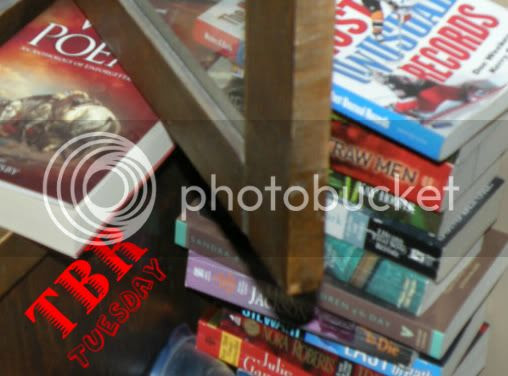 It's TBR Tuesday again! A meme dedicated to those books on our TBR list that need a little love. Head on over to Let's book it to join us.

K, I seriously hoped this meme would help me pick up a few books of the shelf but so far I've only given myself some serious guilt issues. Still, I have a blast picking books and highlighting them. Maybe I'll even get excited enough to read them or one...hopefully.

A monstrous waking nightmare is pursuing graduate student Hailey Maniates across San Francisco to Golden Gate Park where she is rescued by a towering homeless man. She seems able to read her rescuer’s mind, but is it just a delusion? Doctors diagnose her as a paranoid schizophrenic and attempt to prescribe away her alleged hallucinations. But too many questions remain around Hailey and the man who saved her. He appears to suffer from her same mental condition and is convinced that some type of Gypsy vampire is trying to kill them both.

Against reason, Hailey finds herself more and more attracted to this strange man. But what if he is a fantasy? What if he is the monster? (From Goodreads)
Oh, you know you so want to add this one to your TBR shelf too! This one won't have to wait too long, though, as I intend to read it next month.
Posted by Jenny at 7:00 AM