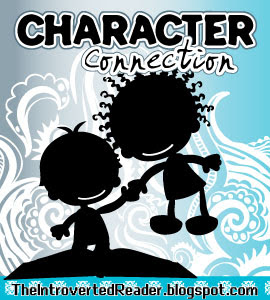 Character Connection is hosted by the lovely Jen from The Introverted Reader. It gives us the chance to gush, ramble, and just plain carry on about a character we love. Head on over and join up, you know you want to.


So, It's been ages since I did a Character Connection but I sort of miss thinking about a character in such depth. It's one thing to like a book as a whole but, let's face it, we usually like books based on the characters. That's why I love this Character Connection meme. It lets us give credit where credit is due.

Will Killian see's ghosts and it's all he can do to ignore them, but when Alona, the most popular girl in high school, gets hit by a bus, ignoring her and her long sexy legs is going to be a lot harder.

OK, maybe you're thinking I just sounded totally anti-feminist and sexist saying a girl with long sexy legs is hard to ignore but that's how Will thinks and why I love him so much. Sure, Alona is a pain in the ass but she is pretty hot. Come on! That is so how a guy thinks and you know it! I'm always so impressed when a author, a woman author, can capture a male character so well.

But back to Will. He's an only child. His dad committed suicide eight months ago and his mom is very concerned about him. He's in therapy for his "problem" but it's not something medication can help. He sees ghosts and if they find out they NEVER leave him alone. The principal of his school has a personal vendetta against him and all he wants is to stay under the radar and make it through the last few weeks of high school. Will manages to ignore the ghosts with the help of his iPod and his antisocial behavior but when Alona dies her ghost is about to make everything change.

My favorite thing about Will is how realistically male he is. I know, I know that's praise for the author but I wouldn't like him so much if he wasn't believable as teenage guy. He admires Alona's body but isn't stupid enough to let that completely control him. After all, Alona is REALLY annoying. He cares about the few people who are truly close to him and just wants to live a normal existence. Best of all he's sarcastic, and if there's one thing I find irresistible it's sarcasm.

As for how I picture Will looking? Will is described by Alona as goth and I love the model on the book covers, he works for me even though Will actually has blue eyes, but I seriously want to mess up his hair. I just can't take a goth with carefully coiffed hair!

Well, I'll stop my rambling. I hope my gushing about Will personally and not just the books will convince you to read this series. So fun! I can't wait for the third one!
Posted by Jenny at 7:00 AM