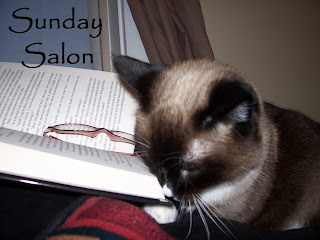 I've decided to revamp the Sunday Salon post....again as a way to catch up with you all if I don’t manage to get any reviews posted. And as a way to combine books movies and TV because the separate posts for all that isn’t working. Ready?

Weather Small Talk: It's finally cooling off at nights which is glorious. The days are warm but not unbearable but it's still dry, dry, dry! It is supposed to rain next week though. I hope it really does and I hope it's lots of rain. We need it badly!

On The Idiot Box: I finished my first K-drama. The one I was talking about last week called Beating Again. It was so soap opera-y but so much fun. The ending was a bit of a cop out but I liked it. I also finished all the available episodes of The Frankenstein Chronicles. It's such a strange show but I liked it too. I Started American Horror Story The Cult and I don't know if I'll finish it. This show keeps getting worse and worse with each season.
.
Weekly Reads: I finished Before We Were Yours. It wasn't at all what I was expecting and I really liked it. I'm still working on Siege and Storm the second book in the Grisha trilogy. I'm liking it but it's one of those books that's so much fun while reading but if you put it down it's hard to pick back up. I squeezed in a Sarah Scribbles book and laughed my way through it and started Bloodlines by Richelle Mead on audiobook for when I get off my butt and go walking everyday.

Crazy Kitties: My cat Belly gave me a huge scare this week. I had the front door open because I was cooking steak and the house was all smoky (I'm so not a cook) and when I was done eating I went out to find her. She's scared of the front yard and never wanders more then 20 feet from the door unless she slips around to the backyard. Well, I called and called for her looking in both the front and backyard and nothing. I started panicking and my husband and I started looking in the neighbors yards and all over the street. I decided to check inside again (I'd already checked all her usual hiding places and remembered she sometimes squeezes under my dresser) but she wasn't there. Suddenly I turn around and see her head poking out of the closet. She'd found a new spot to hide and was behind a huge fuzzy robe hanging in there. Why? Why do cats do this to us?! Ugh!


This Past Week: I went with some of my friends to an author event my library put on with Camron Wright the author of the book I reviewed on Friday, The Orphan Keeper. It was a smaller low key event but a lot of fun...and as usual, I didn't take a single picture.

Movie(S) of the Week: We saw The House With The Clock in its Walls which is not one I'd seek out but there isn't much out in theaters that I haven't already seen so we gave this one a go. It wasn't bad. It was cute and a little spooky and a whole lot of fun.

Food Talk: Remember those steaks I mentioned? After trying and failing to make a decent steak without smoking up the whole house and attempting a roast in my crockpot the next day that turned our dry and rubbery with half the potatoes done and the others still crunchy, I swore off cooking and we went out to dinner the following two nights!

Plans For The Upcoming Week: It's still pretty warm but I think I'm going to start winterizing my yard: Pulling up my annuals and putting up the yard furniture etc. I like all that cleaned up so it doesn't get in the way of raking leaves...and they're starting to fall.
Posted by Jenny at 7:00 AM