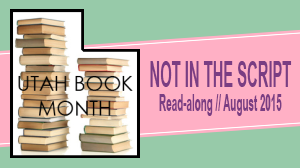 Our read along of Not in the Script by Amy Finnegan is at an end. Now we get to have book club with the author tonight! How exciting is that?!  Here's my answers to the second half discussion questions.

1. Have your opinions of any of the characters changed from the first half?
Not really. I was hoping Brett might be used in a more clever way.

2. Would you watch Coyote Hills?
I have no idea. That's one of the things that bugged me. I had no idea what it was about. It sounds like a 90210 or something so probably not.

3. Did everything go down like you thought it would?
Oh yes, a little too predictable.

4. If there's a lesson to be learned from this story, what do you think it is?
You can't spend your whole life making everyone else happy. At some point you need to think of yourself.

5. How do you feel about the portrayal of the parents of these characters?
Emma's mother as her manager and the problems it was causing could have been used in a more exciting, add to the plot, kind of way but that too was smoothed over all sweetly.

7. What was your favorite part?
I liked when Emma and Jake went stargazing together and finally kissed.

8. Who was your favorite character?
Probably one of Jake's friends.

9. Do you have a favorite quote from the book?
Not one that comes to mind.

10. If you were in charge of a sequel, what major plot would you include?
I really don't think she left things open for a sequel. The drama of Emma firing her mother could have been something left hanging. Using Brett in the way I wanted her too could have left things more open. Honestly, though. I was fine having this one just be a stand alone.
Posted by Jenny at 12:40 PM