Well, it's late Saturday night and at the crack of dawn I'm going to get my HORRIBLE Sunburned self out of bed and drive home. Oh why, why did I forget to put sunblock on? Why did I insist on playing those two games of badminton in the hot sun? Even if I did win them both. ;)

So just a quick recap.
Thursday night we had S'mores round the fire. Not everyone had arrived yet.

Friday after a bit of confusion and waiting for last minute arrivals we headed to Capitol Reef National Park and did some hiking.

After the hike we ate lunch at a park and played in the very muddy river.
Then, back at the house, while dinner was prepared, the rest of us did relays. I know, I suck big time. I didn't get pictures. But my sister did  and I'll post them later if you'd like.

That night we had the most ridiculous "talent"/skit show and had prizes for the funniest, most impressive, where-have-you-been-hiding-that-all-these-years, and the least thought out talent....Yeah, that one had quite a few contenders, but three of my nephews took the prize with a skit about buying pre-blessed food. Don't ask.

Saturday was spent playing badminton, volleyball, and croquet and swimming in the kiddie pools and slippin' on the slippin' slide. 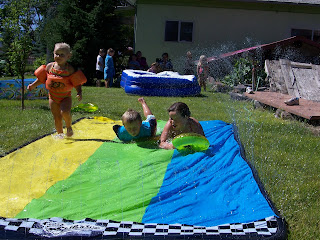 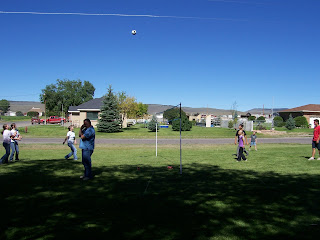 Saturday night we had S'mores again and I had too much, chocolate! (is that even possible?) I forced people to eat S'mores and still had to give packs of Hershey bars out to people who didn't vomit at the sight of them. 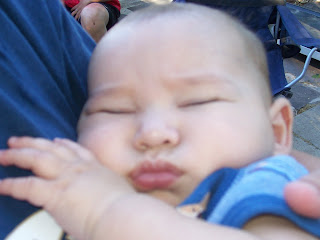 ...and get home in one piece.
Night, night. Thanks for bearing with family stuff rather than book stuff.
Posted by Jenny at 10:58 PM