By Popular Demand, A Night With Christopher Paolini

Alright it wasn't THAT popular of demand but a few of you asked how the night with Christopher Paolini went. I'm a loser and never bring a camera to these things so I wasn't going to post about it but thanks to Suey, who did take pictures, I'll can share some pictures.Thanks, Suey!

After arriving 2 and 1/2 hours before the event started we got there to wait in line...yeah it was that crazy! There were probably at least 50 people ahead of us and by 6:30, when they let us in, the line was very, very long! Crazy! People were dressed up in medieval garb and when Christopher got there they played a fanfare and had a sword salute to welcome him. Holy nerdy-ness!

See, long ago, when I first picked up Eragon, the first book in the series, I saw the picture of Christopher and after noting how young he was I concluded that, yes, indeed, he looked exactly like the kind of guy that would write an epic fantasy. Now don't get mad and call me some kind of nerd racist, I'm a nerd myself, so I can say that. Besides look at him. 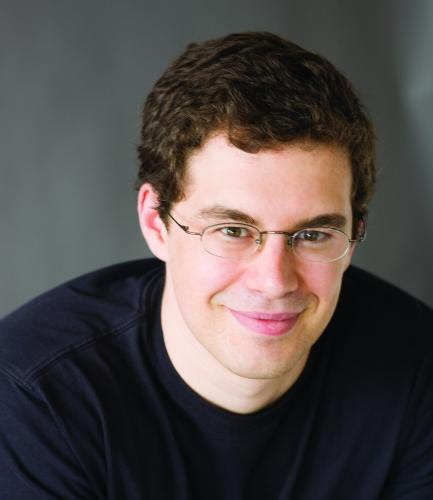 See? He's a bit nerdy looking. Anywho, after listening too him talk about his books, and read from his book in an overly dramatic voice, and answer questions, my previous impression of him was proven to be true; he's a nerd. ;) It was a total blast! A total nerdy blast! 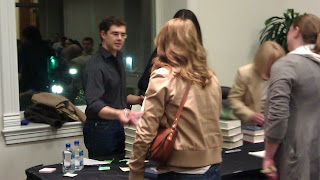 The signing went well. He's the first author who I've ever seen sign THAT fast and still manage to make eye contact and small talk with each person. 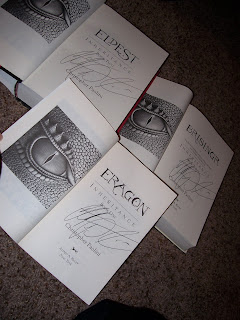 My favorite part of the evening was when he was leaving the room where he had given his speech and some girl in the crowd yelled out, "will you marry me?!" Why did it amuse me? Because that exact thing happened to his character Eragon in the second book. Alright it wasn't THAT funny, but it was a little amusing.

So, there you have it, my meager attempt at a recap of the evening.
Posted by Jenny at 12:14 PM