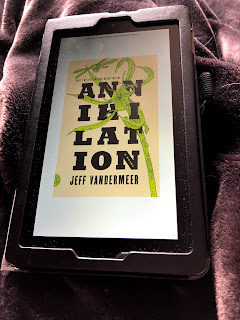 Synopsis
A biologist, a psychologist, a surveyor and a anthropologist walk into Area X...sounds like the beginning of a bad joke, right? It's actually anything but funny. These people are part of the twelfth expedition into Area X. The other expeditions have either never returned or returned as shadows of their former selves and then died of cancer.

First Sentence
The tower, which was not supposed to be there, plunges into the earth in a place just before the black pine forest begins to give way to swamp and then the reeds and wind-gnarled trees of the marsh flats.

If you didn't know, they are making a movie of this book/series and it comes out in February. The previews for the movie looked so mysterious that I decided to read the book(s). I guess this series is wildly popular? Or was when it came out? I didn't even know it existed before the movie preview. I am SO with it. ;) Anywho, I decided to at least read the first book.

I started reading it in the evening and could NOT put it down. I was so engrossed. I wanted to know what the hell was going on. Eventually sleep won out but I picked it back up in the morning and inhaled the rest of it.

Not only was I invested in the story and what was going on but I was drawn into the creepy, disturbing atmosphere so much that when my cat, who was sitting in my lap, sneezed I violently  jumped and then laughed at myself.

I can clearly see from the movie previews that the book is totally different and that once again Hollywood has put their usual antics on display again. Oh well, I'll probably see the movie too but I don't think it will have nearly the disturbing atmosphere the book had.

A lot of people thought this one offered no answers and while I can sort of see their side I don't agree. Sure, we still aren't sure what Area X is but I'm not sure that was the point and as for the rest of it...I thought there were answers.

I want to read the others in the series now but am a bit sad we don't get to follow the biologist anymore. I know her story was over but it sure would be fun to accompany her further.

Should you read it
If you like sci-fi then I'd recommend it.
Posted by Jenny at 7:00 AM