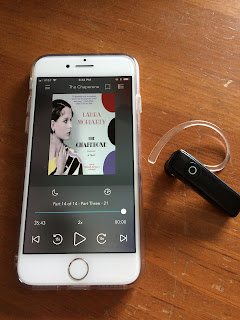 Synopsis
Cora's children are grown and off on their own so when the chance to travel to New York City as a chaperone for the beautiful 16 year old Louise Brooks comes up, she jumps at the opportunity. She has her own secret reasons for going to New York and can use this opportunity to fulfill her goal. But where Cora is traditional and a bit uptight, Louise is wild and modern. The two struggle to understand each other and get along as they spend the hot summer together and learn about each other and themselves.

First Sentence
The First time Cora heard the name Louise Brooks, she was parked outside the Wichita Library in a Model T Ford, waiting for the rain to stop.

I can't remember when I first heard about this one but it must have caught my attention because I added it to my TBR list. When it came up on Overdrive I downloaded it as began to listen.

There's a reason this book is a New York Times best seller. It was rich with details and heart and I cared deeply for the characters. Cora was incredibly traditional. In the early 1920s when hemlines were raising she still wears a corset. Watching her interact with a young, modern and headstrong teenager was amusing. I loved how Cora grew as a person and was open minded enough to realize maybe her way wasn't the best. It was one of my favorite things about this book.

I really felt for Cora. She had a pretty awful life. It could have been worse but a lot of things that happened to her were just unfair and frustrating. I was rooting for her happiness through the whole book.

I love when historical fiction is done right. When you can love the characters enough to gladly follow them through lots of historical events with out a single yawn I think the author has done their job. Not that the '20s and '30s were boring but I can see how some people might think so.

I really liked this epic story and won't soon be forgetting it. I want to check out what else the author has written and get my hands on it.

Should you read it
I think this one has A LOT of things going on in it so there's something for everyone. I'd recommend it!