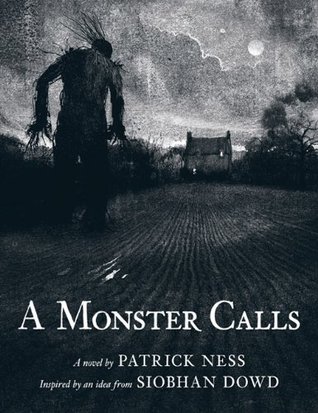 Synopsis
At seven minutes past midnight, thirteen-year-old Conor wakes to find a monster outside his bedroom window. But it isn't the monster Conor's been expecting-- he's been expecting the one from his nightmare, the nightmare he's had nearly every night since his mother started her treatments. The monster in his backyard is different. It's ancient. And wild. And it wants something from Conor. Something terrible and dangerous. It wants the truth. From the final idea of award-winning author Siobhan Dowd-- whose premature death from cancer prevented her from writing it herself-- Patrick Ness has spun a haunting and darkly funny novel of mischief, loss, and monsters both real and imagined. (From Goodreads)

First Sentence
The monster showed up just after midnight.

I've been wanting to read this one forever but I knew it was going to be sad and hard to read, especially since my mother died of cancer.  I finally picked it up and flew through it.

I loved the way this book captured grief. I loved it how so perfectly captured a 13 year old boy. I loved the fantasy/symbolic nature of the monster and how well it just worked.

It wasn't as hard to read about as I thought (considering my mother) but it was hard. It's sad to watch anyone deal with the awful soul crushing grief of a loved one having cancer but watching a 13 year old deal with it broke my heart.

I felt like the book still manages to end on a peaceful note and not leave you completely devastated which I was very grateful for. Highly recommend this one!
Posted by Jenny at 7:00 AM

Email ThisBlogThis!Share to TwitterShare to FacebookShare to Pinterest
Labels: book review, fiction, YA