And the Divers of the Year are....

Well, I could have just quietly excepted Real Madrid's fate. I knew it was nearly impossible for them to stay in the Champions League, as they had to win by three goals, but I wanted to believe. I should have know what happened would happen.

Barcelona, the team they were playing, should be ashamed of themselves!!!! I'll admit Barcelona is a good team, even though I don't want to, but they way they played today was digusting. There I was thinking: I thought I was watching soccer not a swim meet!  I know you might be confused about that so I'll explain. "Diving" is what a player does when any player of the opposite team get within five inches of them and they fall over and start screaming and pretending they're hurt trying to get a foal called. It's a part of soccer, pathetic but true, but Barcelona took it to a whole new level. And the ref? Oh don't even get me started on the ref. Anyway I'll shut up now. I just couldn't let this one go. For shame, Barcelona, for shame!

Well, my boys played great! And that Goal Higuain scored? It counted!!!!! Seriously the ref should be banned! This is Gonzalo Higuain, Real Madrid's best forward. 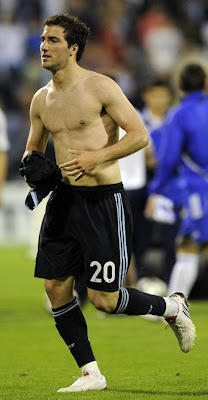