Movie Reviews: Something Borrowed and Hanna

I was really exited to see this one. I wanted to know what the big mystery was. Why this girl was special. Why she was trained to fight....And then I finally saw it. Sigh! First of all the whole movie was filmed like a bad acid trip or a scary fever dream with freaky, weird music and moments that were giving off 90's music video vibes.  It was an interesting story but there were too many things left unanswered. Not like there's going to be a sequel just bad un-thought out writing. So all in all, it wasn't the worst thing I've seen but it just wasn't very good. 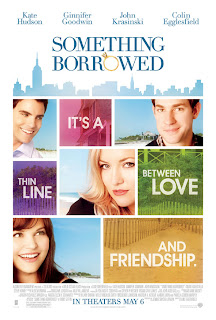 I haven't read the book that this movie was based on, but I did read the sequel to this one so I sort of knew how it all was going to end. Still, that didn't change the fact that it was very emotional for me. I think because the guy who played Dex took me by surprise. I figured I wasn't going to like him because I was an Ethan fan but he totally messed with my emotions! He did such a good job. Rachel and Darcy, the female leads, both did a fine job but I wasn't wowed or anything. and Ethan...Wow!John Krasinski did a really good job too! And how has he been hiding that HOT body as Jim on The Office all these years?!!! So, yeah this one wasn't an all time favorite or anything but I enjoyed it and now I want to read the book.