In one of my previous posts when I talked about soccer I posted a picture of Christiano Ronaldo with his shirt ON because he's arrogant enough not to deserve anyone oogling him. However, today he redeemed himself a bit.  During the game between Real Madrid and Getafe, Christiano Ronaldo cleared the ball and it flew into the stands and nailed a fan right in the face. He actually had a horrible bloody nose. Well after the game Ronaldo did this... 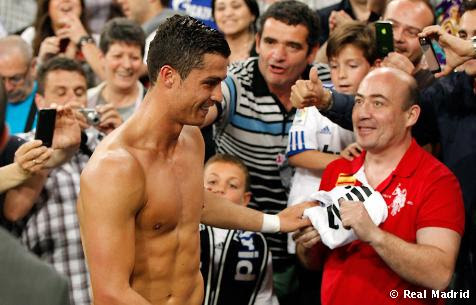 A fan was accidentally hit by the ball in the first half of the match against Getafe when Cristiano Ronaldo cleared it. After the game was over, the Portuguese player apologised personally and gave him his autrographed shirt. "I didn't mean to hit him," he said later, "I just wanted to clear the ball. I wish to apologise."

Well, it's a freaking miracle! He's not quite as arrogant as I thought so he deserves a shirtless picture on my blog. Oh, it's all in good fun. There's nothing like mocking this arrogant guy.
Oh, PS, they won 4-0