Under The Dome Group Read Discussion 2 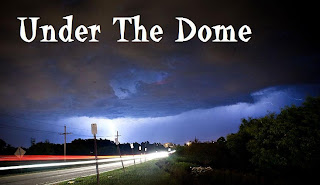 Hey, everyone! It's week two of our group read of Under the Dome for the R.I.P Challenge. Some crazy stuff is going down and I'm getting all worked up. Argh! This book should not be read in public. I tried it once and kept gasping and drawing attention to myself. So, anyways, this week Suey from It's All About Books has provided our questions.

1.  We've talked a little bit about characters already, but I'd like to know who is your favorite so far? And why?
This one's tough! One of my favorites just got killed! Ahhh! I don't think anyone's safe and I don't want to get attached. :( I think I'm going to have to go with "Scarecrow" Joe McClatchey. Mainly because I think he might be safe but I don't even know if that's true. I do like Barbie and his way of handling things (the store riot) but his hesitancy bothers me but it's probably for the best. So, basically, I don't want to have a favorite; they'll get killed!
2. What do you think is up with these kid seizures? Do you have any clue how they are tied to the dome?
I'm thinking the Dome is electric or magnetic or something so I could see that having something to do with the seizures but why it's only affecting kids (sort of) is beyond me.
3. What has been your most favorite creepy/scary scene so far?
Oh boy, I don't know. The riot was freaky because it was so realistic but the truth is, Junior freaks me out. Who sits with dead people and touches them and holds their hands. He likes the smell of their decay, for heavens sake! Blech! Anytime it starts talking about him I get seriously creeped out!

4. I'm assuming everyone knew what to expect from a Stephen King book, writing/style-wise. But still, I'm curious to know how you are all handling the vulgarity in parts. Does it bother you? Does it add to the story and give you a feel for certain characters? Or does it distract?
I'm so immune to this stuff (unfortunately) that I haven't really noticed. I've also been out there in the world and seen that people really do swear...a lot! So, it's not that unrealistic. Necessary? Meh, but it's normal for King and most people so why wouldn't he add it?

5. This last section ended with what I thought was an unexpected murder. Do you think anyone could get murdered at this point? Or is there a line that you do not cross regarding certain characters? In other words, do you think certain characters are safe from getting the ax? Are you curious about who will get it next, and who will survive?
Oh my gosh! That murder was not unexpected when she chose to go alone to meet Big Jim but I was still devastated. And the way he "buried" the body...Ahhhh! With King anything is possible; Big Jim could win and all the good characters could be killed off. I almost wouldn't be surprised. And, because of all the ominous hints about more suicides I'm starting to think, "OK, crap! Who's going to kill themselves?" I said it before and I'll say it again, I'm trying REALLY hard not to get attached to these characters!

So, despite the anxiety this book is causing me I'm loving it so far and am dying to know what will happen next. It's very hard to reign myself in and try to keep to the assignments instead of reading ahead.
Posted by Jenny at 7:00 AM