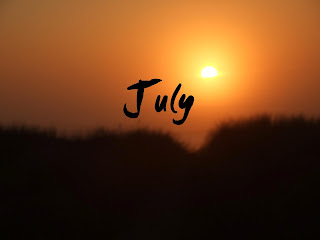 July, as I've mentioned before, is NOT my favorite month. It's just too hot! Even with a pool it's unbearable. And it seems to go on and on! Am I right? Anywho, I'm glad Dewy's 24 Hour Readathon decided to do a reverse reathathon. It was nice having something to look forward to and it really upped my reading numbers. I read 4 books for the readathon bringing my books read in July up to 11. I'm so close to reaching my Goodreads goal for the year and I still have so many months to go! Wahoo! Here's what I read. 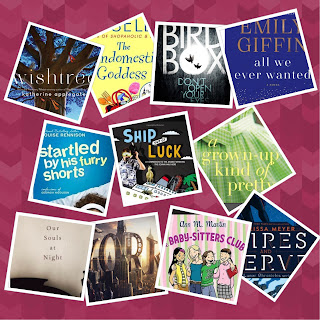 Wishtree by Christine Applegate, The Undomestic Goddess by Sophie Kinsella, Bird Box by Josh Malerman, All We Ever Wanted by Emily Giffin, Startled By His Furry Shorts by Louise Rennison, Ship Out Of Luck by Neal Shusterman, A Grown Up Kind Of Pretty by Joshilyn Jackson, Our Souls At Night by Kent Haruf, The Shadow Cipher by Laura Ruby, Kristy's Great Idea by Raina Telgemeier and Wires and Nerve by Marissa Meyer.

Phew! Favorite was Bird Box for sure. You must go read this book! Least favorite was Our Souls at Night and All We Ever Wanted but even those were two star reads.